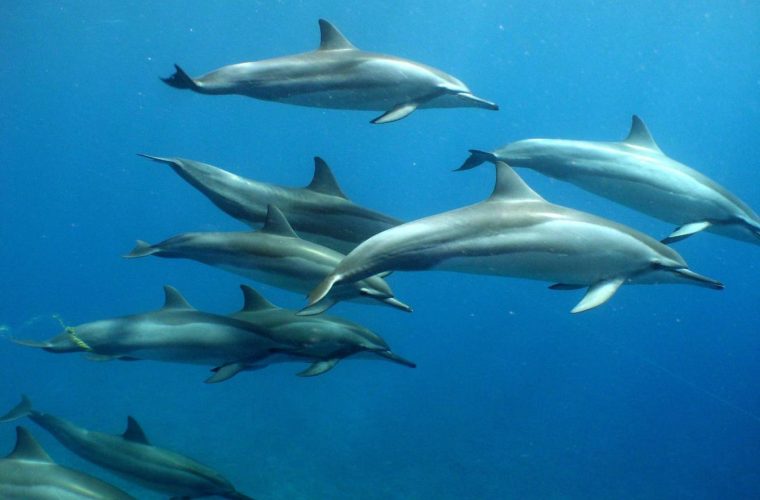 Maui has a beautiful underwater world full of exquisite marine life. Whether you snorkel in Maui, scuba dive, or take a boat out to Molokini Crater, you are destined to experience something magical. Maui has some of the best snorkeling spots in the world and we are lucky enough to be able to see beautiful tropical fish, sea turtles, whales, dolphins (and more!) in their natural environment.

Have you ever wondered what you might see while snorkeling in Maui? We have compiled a list of different types of marine life you could possibly see during your next snorkeling trip. 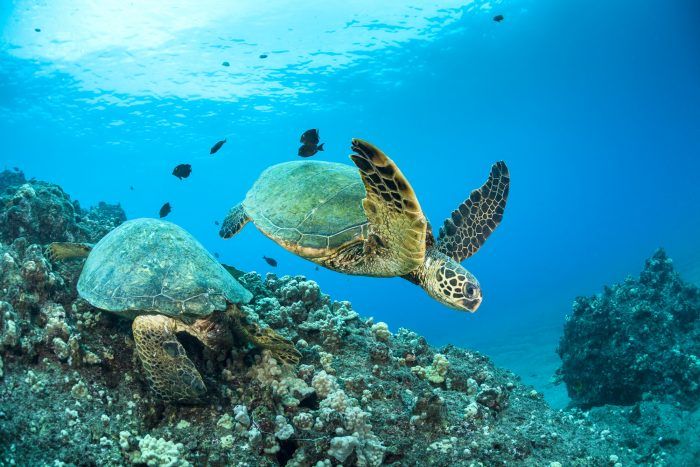 The Hawaiian green sea turtle lives on both land and in the ocean.  Coral Gardens is a wonderful place to snorkel and swim with turtles and is only accessible by boat. The Four Winds II offers an afternoon trip that  goes to Coral Gardens (weather permitting). If you are wanting to see the turtles on land, check out Hookipa Beach Park and enjoy seeing them sun bathe in the sand.

The sea turtles dig a nest and lay an about 75 to 100 eggs per nest (they can dig about 6 nests per season; usually during early summer months). The eggs take about two months to emerge and become hatchlings. Interesting Fact: The sex of the turtle is determined by temperature.

A Hawaiian sea turtle has the approximate lifespan of 80-100 years and can weigh up to 700 pounds!

The name “turtle” in Hawaiian is honu. Hawaiian green sea turtles are typically found in warm subtropical and tropical ocean waters. In the U.S., you can find sea turtles in Hawaii, the Virgin Islands, Puerto Rico, and even Florida (east coast). 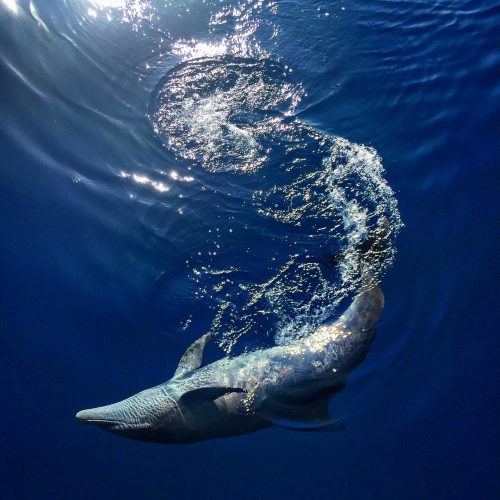 Spinner dolphins are protected by the Marine Mammal Protection Act (MMPA) and are quite a common spectacle to be seen in Maui. Witness dolphins skipping and jumping across the ocean. Spinner dolphins are extremely social and are one of the most common spotted marine animals within the Hawaiian Islands.

Dolphins tend to form long-lasting groups. A group of a singular species of dolphins between 2 and 40 is called a pod. Larger groups are called a school or herd. Schools or herds can be comprised of more than one species. For example, here on Maui, when we encounter a school of dolphins, it is often made up of spinner dolphins and spotted dolphins. 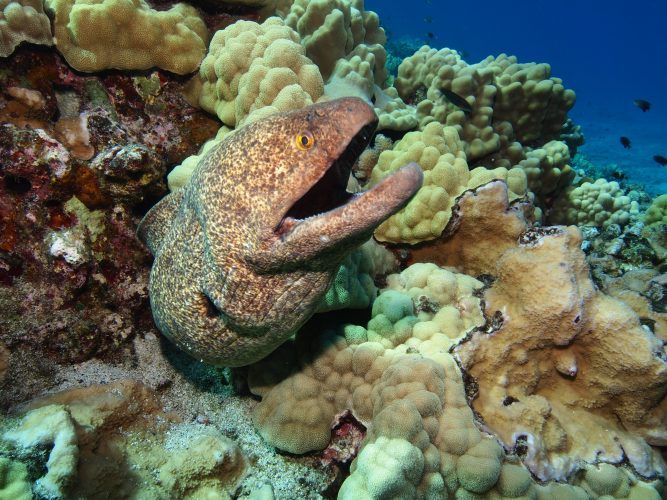 Moray eels are very interesting creatures and are mainly found in saltwater, although there are some species that do live in freshwater. Morays are carnivorous and feed on fish, crustaceans, octopuses, etc. These eerie creatures are quite sneaky and like to hide in between coral crevices. At night, they come out to hunt. The eels snake-like appearance can sometimes be mistaken as a reptile, when in fact they are a fish. The largest number of moray eels are found in warm, tropical waters, which is why we often spot them while snorkeling in Maui! 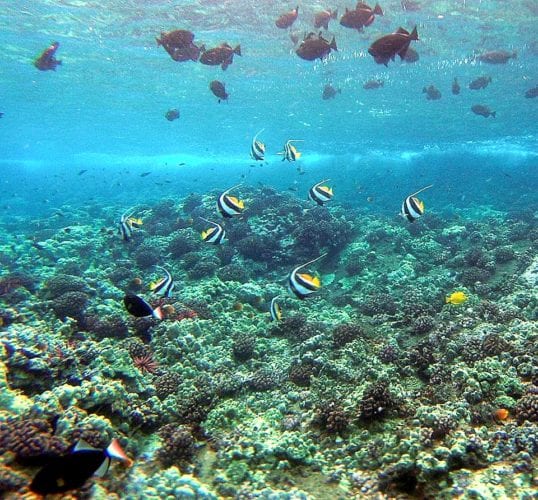 Out of all the islands in the world, the Hawaiian Islands are the most isolated. Most of the plants and animals were brought to Hawaii by man. The evolution of Hawaii’s’ marine habitat is unique. About 30% of the tropical fish found in Hawaii cannot be found anywhere else in the world! Snorkeling in Hawaii is a thrilling experience. You’ll love the bright, beautiful colors of the fish. Some of the most popular fish you may see while snorkeling are: Moorish idols, yellow tangs, triggerfish, surgeonfish, butterflyfish, parrotfish, angelfish, pufferfish, and more! 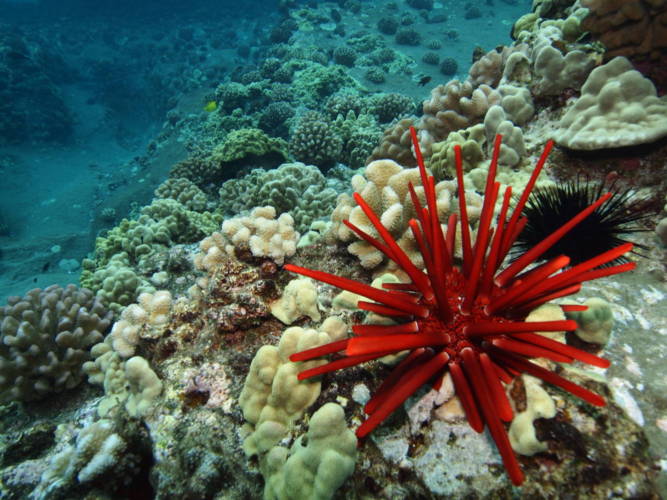 Coral reefs are made up of thin layers of calcium carbonate. Generally speaking, large corals grow quite slowly, at an approximate rate of about 0.2 to 0.8 cm per year. While snorkeling in Hawaii, it is very important that you do not touch the coral. Touching or stepping on coral reefs damage the outer layer (which protects it from other organisms and diseases). We also greatly encourage the use of reef-safe sunscreen. We offer complimentary use of reef-safe sunscreen on board on both the Four Winds II and the Maui Magic. 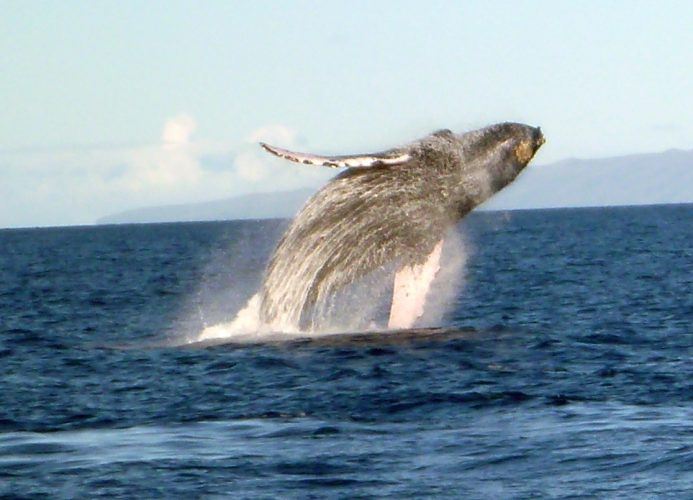 Every year, humpback whales migrate from Alaskan waters to Hawaii to calve, mate, and rear their young. Whale watching season in Maui runs annually. Generally, we see whales December through March.  The whales are abundant and provide Maui residents and visitors a great opportunity to watch humpback whales in their natural habitat. Whale watching season in Maui is our favorite time of year! During whale season, all our snorkel tours offer whale watching to and from our snorkel destination.

Humpback whale behavior is extremely interesting! We have listed some of the most common behavioral traits that you could see while on your snorkel and whale watching tour:

Usually the first indication that whales are nearby is by their blow, which is how the humpbacks exhale air. On average, they breathe about every 15 minutes. Juveniles need to rise to the surface every 5 minutes.

A whale breach is an acrobatic display where the humpback launches itself out of the water and then lands back onto the surface of the water, creating a huge splash.

A tail slap consists of a whale raising its tail flukes out of the water and slapping them forcefully on the water’s surface, resulting in a tremendous splash that can be heard far away. It is common for the whales to repeat this behavior over and over.

While at the surface, the humpback whales will lay on their sides, lift their fins into the air, and then slap them down on the water, creating a loud smack.

The whales are as curious about us as we are them! The whale will rise vertically up towards the surface, with its head out of the water to view what is happening above water and on the surface.

The ‘fluke up dive’ is usually a signal that the whale is departing for a deep dive. The humpback arches its massive tail flukes up into the air, and then slowly and gently dives into the deep. In Maui, this is a whale’s form of saying “Aloha”!