Yellow Tang, also called “naughty tang”, are in the surgeonfish family. Adult fish can grow to  7 to 8 inches in length, and roughly .5 to .75 inches in thickness. Adult males tend to be larger than females. All individuals of this species are bright daffodil yellow in color. At night, the yellow colouring fades slightly and a prominent brownish patch develops in the middle with a horizontal white band. They rapidly resume their solid bright yellow color with daylight.

They have an arrow-like shape due to their dorsal and ventral fins being almost an extension to their bodies, and a long snout-like mouth used (as with other tangs) to eat the algae off rocks. They also have a sharp spine located near their tail. They have become one of the highest export fish for aquariams out of Hawaii.  You’ll spot the yellow tang in the film Finding Nemo as the character Bubbles, as well as, one of the viewable fish in Nintendo’s Endless Ocean for the Wii. 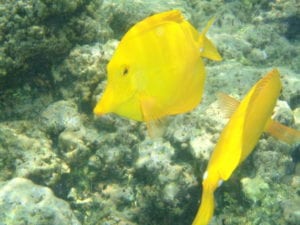 The Raccoon Butterfly fish is one of the hardier of the butterfly species. In the wild it is primarily nocturnal, meaning that it is most active at night.  These Butterflyfish can reach up to 8 inches and are usually found in pairs on the shallow reefs.  Although the coloration of this group varies quite a lot, they are all largish butterflyfishes with an oval outline, and most have a pattern of ascending oblique stripes on the flanks. 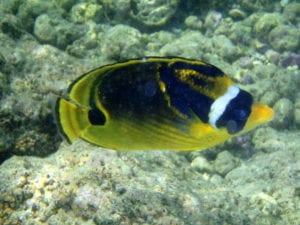