The Friendly Shark of the Sea 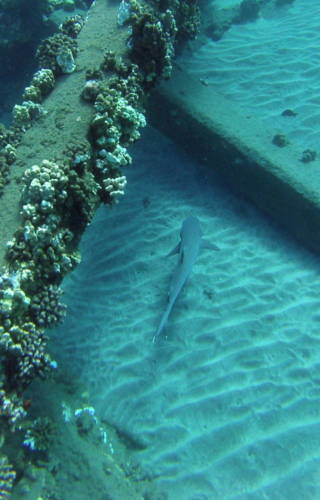 The white tip reef shark is a small shark, usually not exceeding 5.2 ft in length.  This creature is easily recognizable by its slender body and short but broad head, oval eyes with vertical pupils, and white-tipped dorsal and tail fins . One of the most common sharks found on the Hawaiian reefs, the white tip shark can also be found as far west as South Africa and as far east as Central America. It is typically found on or near the bottom in clear water, at depths from 26–130 ft.

During the day, white tip reef sharks spend much of their time resting inside caves. Unlike other sharks that must constantly swim to breathe, this shark can pump water over its gills and lie still on the bottom. At night, white tip reef sharks emerge to hunt bony fish, crustaceans and octopus. Their elongated bodies allow them to force their way into crevices and holes to extract hidden prey. Individual white tip reef sharks may stay within a particular area of the reef for months to years.  White tip reef sharks are rarely aggressive towards humans, though they may investigate swimmers closely.