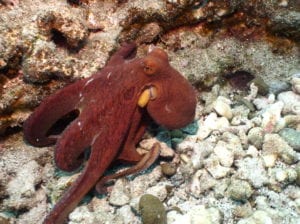 Octopuses are characterized by their eight arms (distinct from the tentacles found in squid and cuttlefish), usually bearing suction cups.  The majority of octopuses, have almost entirely soft bodies with no internal skeloton. They have neither a protective outer shell, nor any vestige of an internal shell or bones, like cuttlefish or squid. A beak, similar in shape to a parrot’s beak, is the only hard part of their body. This enables them to squeeze through very narrow slits between coral, rocks, and other hiding places among the reef.  Octopuses are highly intelligent, probably more intelligent than any other order of invertabrates. Their short lifespans limit the amount they can ultimately learn.  An octopus has a highly complex nervouse system, only part of which is localized in its brain.  Two-thirds of an octopus’s neurons are found in the nerve cords of its arms, which have a remarkable amount of autonomy. Octopus arms show a wide variety of complex reflex actions arising on at least three different levels of the nervous system.

An octopus’s primary defense is to hide, either not to be seen at all, or not to be detected as an octopus. Octopuses have several secondary defenses (defenses they use once they have been seen by a predator). The most common secondary defense is fast escape. Other defenses include the use of ink sacs, camouflage, and autotomising limbs. Most octopuses can eject a thick blackish ink in a large cloud to aid in escaping from predators. The main colouring agent of the ink is melanin, which is the same chemical that gives humans their hair and skin color. This ink cloud is thought to dull the smell, which is particularly useful for evading predators that are dependent on smell for hunting, such as sharks.  An octopus’s camouflage is aided by certain specialized skin cells which can change the apparent color, opacity, and reflectiveness of the epidermis.  They contain yellow, orange, red, brown, or black pigments; most species have three of these colors.