Molokini Crater is one of eight offshore islet seabird sanctuaries in Maui. Molokini is a horseshoe shaped “monogenetic volcanic cone” (also known as a tuff cone) that is located between the islands of Maui and Kaho‘olawe. The islet is approximately 22 acres and reaches a maximum height of 160 ft. The outer slope of Molokini is quite bare, whereas the inner slope is where most of the vegetation grows. The raging trade winds only really allow for the vegetation to grow a meter or 2. Buffel grass is the most common vegetation found on Molokini, although they have discovered a few native plant species on the islet, where the buffel grass has not dominated.

The ‘ua‘u kani (wedge-tailed shearwaters or Puffinus pacificus) call Molokini home and are known as the “main residents”. The ‘iwa (frigate birds or Fregata minor) can often be spotted flying over the islet. 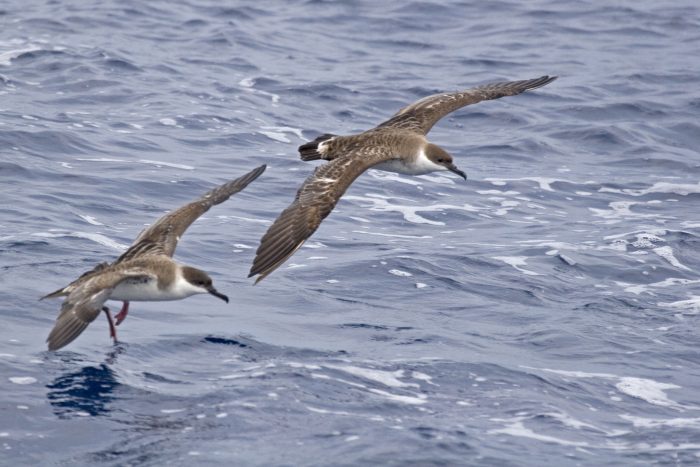 The wedge-tailed shearwater is a large seabird that produces a variety of sounds, known as “wails and moans”. It is because of this that they were given the Hawaiian name ‘ua‘u kani, which translates to “calling or moaning petrel”. There is no way to tell the sexes apart by their color (adults are polymorphic, being dark or light). In Hawaii, ‘ua‘u kani mainly eat flyingfish, squirrelfish, flying squid, and larval goatfish. These birds breed in natal colonies and form long-term pair bonds. The females only lay one egg per season (usually in June) and both the mother and the father raise the young together.

The ‘iwa (or great frigatebird) is a large seabird that is often seen flocking over Molokini. ‘Iwa’s are quite graceful and are related to boobies. There are five subspecies of ‘iwa, but only one of them, the F. m. palmerstoni, breeds in Hawaii. ‘Iwa are typically described as having a slim figure, long forked tail, long hooked bill, and men will inflate their red gular pouch when wanting to impress a female. Adult females are larger than males. The great frigatebirds hunt their prey, but are also known for harassing other seabirds until they regurgitate their food. ‘Iwa literally means “thief” in Hawaiian and the English meaning of “frigate” refers to “fast ships used by pirates”. These birds usually feed far from land (either in pairs or alone) and their diets usually consists of flyingfish and squid (in Hawaii).

All state bird sanctuaries are protected places where seabirds can nest and not have to worry about predators or animals; it is a rare, safe place for them to rear their young. The great thing about the protected sanctuaries is that it provides the protection for native plants, insects, etc., and stops humans from carrying weeds and invasive pests within the area. Sanctuaries are meant to be admired from a distance.

We are often asked by our guests if you are able to go on to Molokini… the answer is no. Some of the activities that may be possible with the proper permit are: scientific research, conservation, and  traditional practices by Native Hawaiians (long-term conservation). There are no tours on the actual islet and it is strictly prohibited to touch or take anything from the crater.

The Department of Land and Resources (DLNR) have a set of rules that govern activities in the waters around Molokini. Our company follows all guidelines set forth by the DLNR and we are very vigilant in making sure our guests know how important it is to preserve Molokini.If you are looking for a snorkel tour of Molokini, you’ll love the Four Winds!