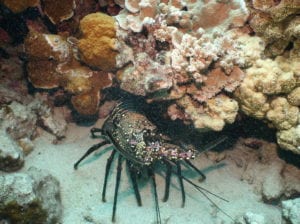 The Spiny Lobster is endemic to Hawaii.  You can can determine this particular lobster by it’s purple and white striped tail and black legs with a single white stripe.  It is the most common species beyond the surf zone to deep water and it can get up to 16 inches.  The Spiny Lobster has significantly decreased in numbers over the  years due to over harvesting.  Officials have limited catching to only a few months out of the year, and only females, to try to re-establish the population. 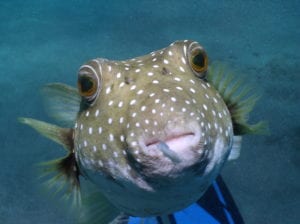 This particular puffer fish comes up to see us almost everytime we are in coral gardens.  He’s a friendly and curious little guy, that loves our videographer!

The family includes many familiar species which are variously called puffers, balloonfish, blowfish, bubblefish, globefish, swellfish, toadfish, and toadies.   Puffer Fish are the second most poisonous vertebrate in the world, the first being a Goldon Poison Frog. The skin and certain internal organs of many puffers are highly toxic to humans, but nevertheless the meat of some species is considered a delicacy in both Japan and Korea.  If one is caught while fishing, it is recommended that thick gloves are worn to avoid poisoning and getting bitten when removing the hook.  As a defense mechanism, puffers have the ability to inflate rapidly, filling their extremely elastic stomachs with water until they are more circular (balloon) in shape. Thus, a hungry predator stalking the puffers may suddenly find itself facing what seems to be a much larger fish and pause, giving the puffers an opportunity to retreat to safety.