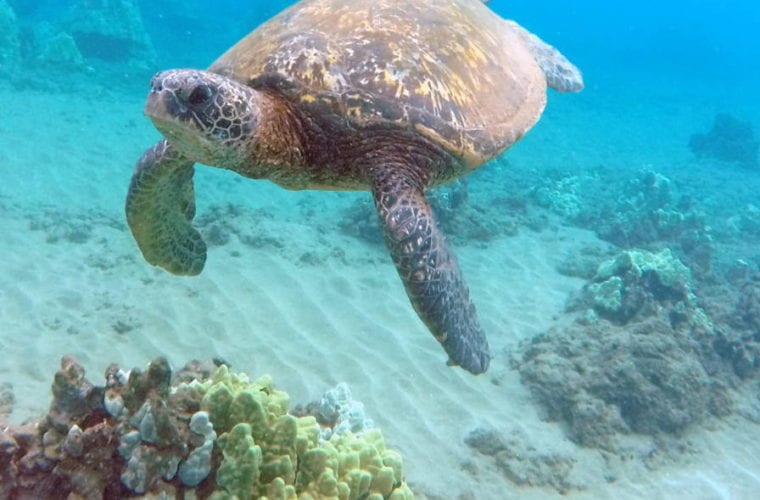 Sea turtles are graceful saltwater reptiles, well adapted to life in their marine world. With streamlined bodies and flipper-like limbs, they are able to swim long distances in a relatively short time. When they are active, sea turtles must swim to the ocean surface to breathe every few minutes. When they are resting, they can remain underwater for as long as 2 1/2 hours without breathing. Green turtles often rest in caves or under ledges in deep water.  Although sea turtles live most of their lives in the ocean, adult females must return to land in order to lay their eggs. Scientists believe that nesting female turtles return to the same beach on which they were born. Often, sea turtles must travel long distances from their feeding grounds to their nesting beaches. Just how sea turtles find their nesting beaches is unknown.  Hawaii’s green turtles migrate up to 800 miles from their feeding areas near the coast of the main islands to nesting beaches in the Northwestern Hawaiian Islands. The males accompany the females in this migration and mate with them offshore from the nesting beaches. After depositing about 100 eggs, the female covers the nest with sand and returns to the sea, leaving the eggs to incubate during the next two months.  After hatching, the tiny, one-ounce turtles take several days to emerge from their nest. Once out of the nest, the hatchlings race to the water and swim constantly for the next 36 to 48 hours.  While in the open ocean, young green turtles are  carnivorous and feed on invertebrates such as jellyfish.  The life span of sea turtles is unknown. Hawaiian green turtles seem to grow very slowly in the wild and may take 10 to 50 years (average 25 years) to reach sexual maturity.  Male and female green turtles look alike until they are mature. Then, the male develops a long tail extending beyond the hind flippers. A female’s tail extends only a short distance beyond the end of her shell. 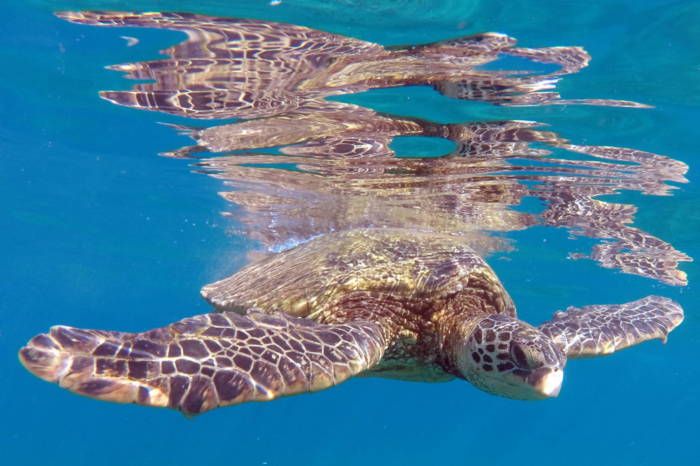 In Hawaii, the green turtle is a threatened species. Only 100 to 350 females nest each year, principally at French Frigate Shoals in the Northwestern Hawaiian Islands.  To help restore Hawaii’s sea turtles to their former abundance, the National Marine Fisheries Service, the U.S. Fish and Wildlife Service, and the State of Hawaii’s Department of Land & Natural Resources have formed a Recovery Team. This team will identify research, management, and enforcement needs and will promote conservation through public education programs. All sea turtles in Hawaii are fully protected under state law and under the federal Endangered Species Act. These laws prohibit harassing, harming, killing, or keeping sea turtles in captivity without a permit allowing these activities for research or educational purposes. Divers should be aware that riding turtles is illegal and puts these animals under stress.