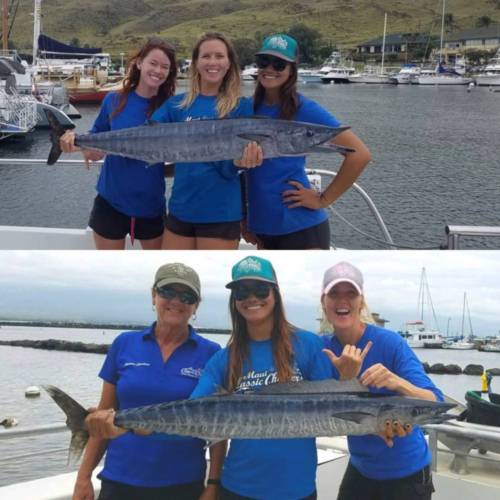 The time for catching fish has finally returned, and the Ono’s are loving our lures!  This past Friday morning got really exciting on the Four Winds II, right as we were about to pull into Molokini Crater!  There’s nothing that get’s the heart racing quite like the sound of the clicker and someone saying, “FISH ON”!  The crew immediately put one of the passengers on the pole to help reel it in, and sure enough it was at least a 15lb fish.  After a few minutes of action and furry, we finally got everything settled and made ready to get in the water..  After all, we are a snorkel trip!  It was a great morning in Molokini Crater with the visibility well over 100 ft.!  Everyone had seemed to have all the snorkeling they wanted after about 2 hours, so we pulled out to show them the backside of the Crater.  Wouldn’t you know it, not even half way around I looked over at the reel, and it was going crazy!  Could it be two fish in one day?  The crew member that set the line had accidentally forgotten to set the clicker so we didn’t even know it was on!   We grabbed another passenger to take on the next Ono.  It was a mission to bring it in because it was so far back, so I ended up hand lining it the last 50 yards.  The second one was even bigger then the first, at least 20lbs!  BEAUTIFUL!

Ono is an absolutely delicious white fish with a little bit of a sweet flavor, and a nice firm texture.  Definitely order it next time you hear it as a special!