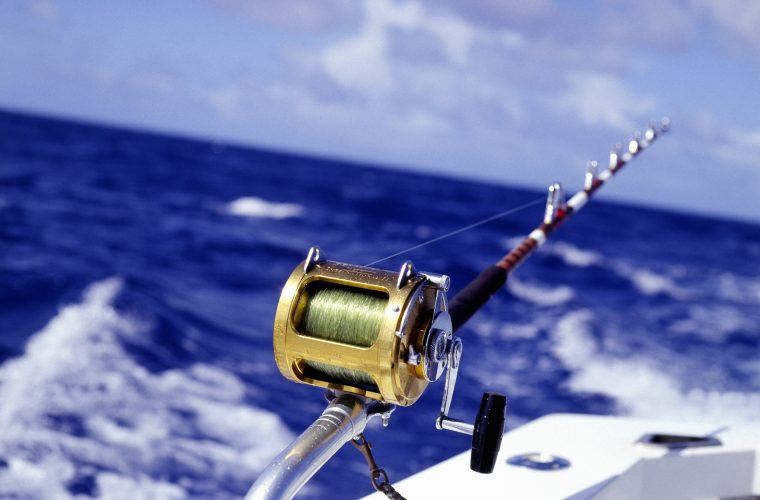 Sport Fishing in Maui is a exciting way to experience Maui's ocean world.

Sport fishing in Maui is a very popular activity to do while visiting the island. Did you know that you can go on a family-friendly snorkel tour on Maui AND get the chance to fish? The Four Winds II loves to multi-task and provide you with the best trip possible. Enjoy your boat ride out to Molokini Crater, while searching for dolphins and marine life AND watching our crew fish in hopes of catching the big one!

We do not fish during whale season, but during January through November we fish almost every day. Some of the local fish we catch include: Pacific blue marlin, mahi-mahi, wahoo (ono), ahi, and ulua. Discover more about popular Hawaiian fish that we catch on the Four Winds!

The Pacific blue marlin is an amazing creature and open to sport fishing in Maui, but you won’t spot one of these while snorkeling in Maui. The marlin is one of the biggest fish in the world and spend the majority of their lives far out at sea. Females are larger than males and can reach a length of up to 14 feet and weigh up to 1,900 pounds! If you come across a marlin that is more than 300 pounds, it is most likely a female. These fish put up quite a fight when they are caught, which makes them highly desirable for sport fishermen.

The marlin is a very difficult fish to find. June, July & August are the best months for blue marlin fishing in Hawaiian waters. It’s not to say they can’t be caught throughout the rest of the year though! There are three major fishing tournaments in Maui each year: Spring Shootout, the Lahaina Jackpot, and the Halloween Shootout. Many of the sport fishing boats on Maui encourage catch-and-release.

Mahi-mahi is a ray-finned fish that resides in the waters around the Hawaiian Islands. It is a surface-dwelling fish whose name means ‘very strong’ in the local language. Mahi mahi is a premium sport fish in Maui.

Mahi-mahi is also known as common dolphinfish although it not related to dolphins at all. These fish are easy to recognize given their long dorsal fin that extends from their head to their tail. They feature bright and vivid colors – golden sides embellished with sharp blue and green tones.

Mahi-mahi derives its nutrients by feeding off flying fish and mackerel as well as crabs and squids. These carnivorous fish taste delicious, too.

If you are craving some fresh seafood, head to any local restaurant and order a hot and sizzling serving of mahi-mahi.

Wahoo, also known as ono and Pacific kingfish, is an open water fish found throughout the world in tropical and subtropical waters. Ono means “delicious” in Hawaiian. Trust us when we say the name doesn’t do this “yummy” fish justice!

Wahoo are a highly desirable sport fish due to the quality and speed.  This fish is fast growing and they can live up to approximately nine years of age. Adults usually are found in solitary or in small groups of two or three. Ono tend to feed on fish and squid. The body of the ono allows them to reach fast speeds under water, which allows them to easily catch prey.

If you’re skilled (or lucky?) enough to catch an ono while sport fishing in Maui, you’ll see their beautiful bluish green on the upper portion of their body and the rest is a fade of silver and blue. The meat of the Ono is delicious and perfect for grilling, ceviche, and pan seared.

In Hawaii, “ahi” refers to two species of tuna: yellowtail and bigeye. Yellowfin tuna has a slimmer build than the bigeye. With ahi, the larger the fish, the more red the meat is. The larger ahi also contain a higher fat content than smaller fish, which is highly sought out for raw fish products.

Ahi that are caught in Hawaii usually range from 3 to 200 pounds (or more!). The larger fish are usually caught in deep waters. Tuna is caught year-round in Hawaii and are most abundant during the summer months between May – September.

The texture of ahi is firm and mild in flavor. Hawaii is known for its very popular dish, the “ahi poke”, which is small pieces of raw fish cut up and seasoned to perfection. Many restaurants and grocery stores have a poke counter, where there is a wide variety of different flavors, and even different types of fish.

No sport fishing in Maui trip would be complete with considering the giant trevally, known in Hawaii as “ulua aukea” or “ulua”, is a large marine fish within the jack family. The ulua is found in tropical waters throughout the world. You can identify the giant trevally by its large head profile. The uluais fast growing and can reach up to about 65 inches in length and weigh up to 175+ pounds.

The giant trevally is at the top of the food chain and is known to hunt fish in solidarity and in schools. The ulua can also eat mollusks, crustaceans, and cephalopods.

The ulua is a near shore game fish and they are the largest of the Jack family. You can find ulua in tropical reefs, where they rule like kings. Their size and speed make them an apex predator.

Decreasing numbers in the Hawaiian Islands has led to proposals with efforts to reduce the number of giant trevally that are able to be caught in Hawaii.