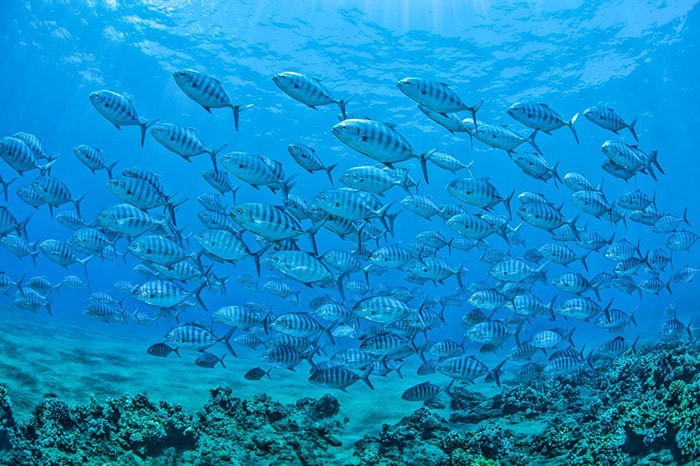 Maui is one of the best destinations for snorkeling. The island of Maui has one of three volcanic caldera craters in the world, Molokini Crater. Molokini is home to thousands of tropical fish, coral species, algae, and multiple types of marine life. Coral Gardens is another top snorkel site, which is also located on Maui. Both of these destinations provide snorkelers a chance to see the beautiful underwater aquarium that Maui naturally provides.

We have put together a list of 10 Hawaiian fish (with pictures and videos) that you can most likely see while snorkeling. Most of these fish are found on the shallow reef and rocks. This list is a great way to start and lets you know some of the fish you want to look out for while snorkeling Maui.

The Four Winds II has two daily snorkel tours; the morning tour goes to Molokini Crater and the afternoon tour typically goes to Coral Gardens (all weather permitting). Both tours offer a fantastic snorkeling experience that you will surely remember.

Parrotfish are the largest and most colorful of the reef fish in Hawaii. Sizes range from 10-40 inches. Adult fish have fused front teeth, that almost resemble a parrot like beak, hence where they get their name. Similar to wrasses, the female parrotfish can change her sex and become a male. Most parrotfishes are omnivores and feed on algae. 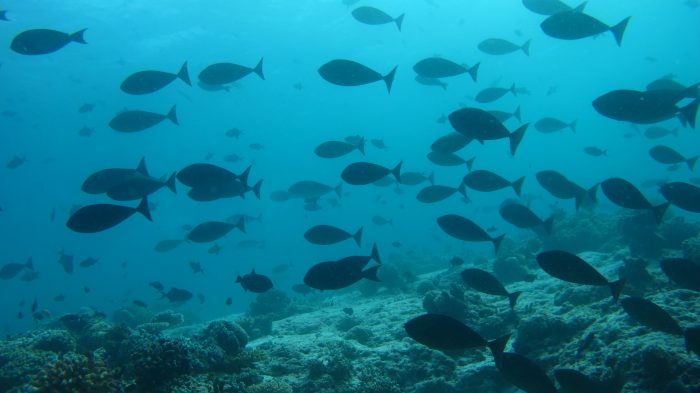 One of the most common species of fish you will spot during your snorkeling adventure at Molokini is the black durgeon triggerfish. The average size ranges from 10 – 12 inches long. Triggerfish mainly feed on zooplankton and algae. The black durgeon is most commonly found in the water column. Triggerfish are quite territorial and aggressive towards other reef fish.

One of the most popular reef fish, the humuhumunukunukuapua`a, is also the Hawaii state fish. The Hawaiian name literally translates to “triggerfish with a snout like a pig”. Typically, the humuhumu are about 6-7 inches and eat algae, small shrimp and crabs. The humu are usually spotted 0-15 feet below the surface and like shallow protected bays. Just like the black durgeon, humu’s are territorial, especially when there are eggs that they are protecting.

The stripebelly is a medium sized puffer, ranging from 14-18 inches long. These puffers are usually found in shallow lagoons and in sandy and rocky areas, so that it can feed on invertebrates. Puffers will usually allow you to approach them within a few feet and then will quickly flee away until it feels safe. Puffers are known for the way  inflating their bodies with water (to appear larger) to stop predators from eating them. Another interesting fact about pufferfish is that they can also inflate themselves in a hole so that it becomes impossible for a predator to pull them out. Puffers can be extremely toxic to eat unless you know how to properly prepare them; even then, it can still be very dangerous to consume. 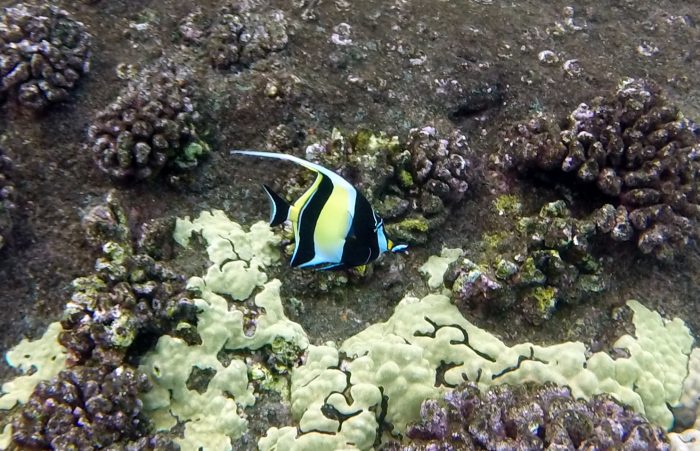 The Moorish idol shares many similar characteristics with the Surgeonfish, but it is the only species in its family. Moorish idols have long and thin snouts, so that they can reach in between crevices while feeding. The average size of a Moorish idol is between 7-9 inches. Moorish idols are one of the most commonly spotted species while snorkeling in Maui. This particular fish mainly feeds on sponges, plant life, and invertebrates. 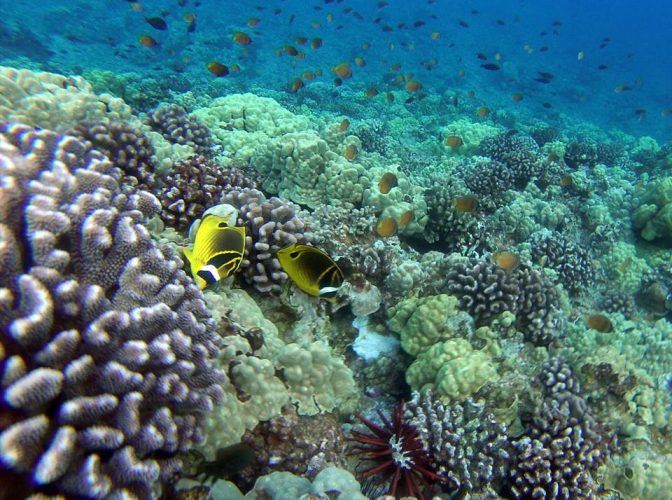 Butterflyfish are some of the most beautiful and colorful fish you can spot while snorkeling Molokini. You can spot them in shallow bays and near the shoreline. Three species of butterflyfish are endemic to Hawaii (found only in Hawaii). 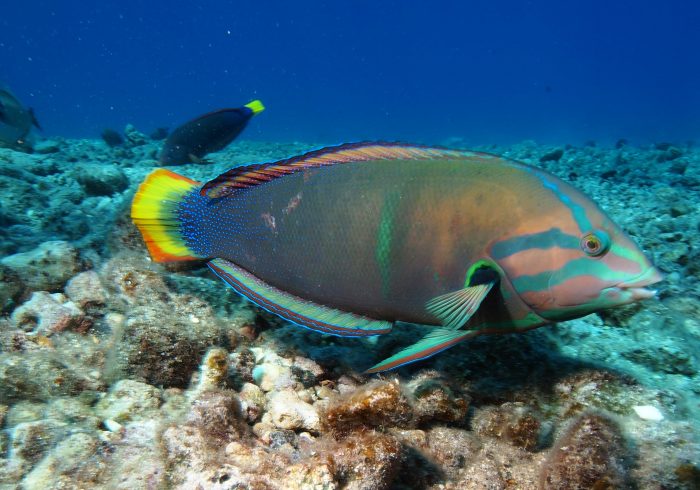 The Wrasse family is one of the most beautiful and diverse categories of fish. Snorkeling in Maui provides such an amazing opportunity to get the chance to see unique and complex marine life. Hawaiian wrasses vary in size, from 2 – 15 inches and are typically carnivorous, feeding mainly on smaller fish and invertebrates. Many wrasses have teeth that they use for eating invertebrates. The wrasse tends to forge for food during the day and sleep under the sand at night.

One of the most interesting facts about the wrasse family is that the female has the ability to change sex. Depending on the females environment, she will sometimes change her sex to become a male to replace one that has passed away. This stops other males from trying to take control of the harem.

The Yellow Tang is one of the most common fish spotted while snorkeling the Hawaiian reef. Due to the vibrant yellow coloring of this particular tang, it is often the first fish that beginning divers and snorkelers recognize. Tangs graze and eat algae during the day and hide at night. Yellow tangs are usually found in shallow reefs . Male tangs tend to be larger than females. At night, the bright yellow coloring fades and they regain color during day time. Normally, yellow tangs are found alone or in small schools.

The trunkfish (also known as a boxfish) is a very unique looking fish. Typically, boxfish move slowly and get the name “boxfish” from there hard outer covering (shell). The trunkfish is a subspecies of those found throughout the Indo Pacific. Trunkfish feed mainly on mollusks, sponges, and algae and are typically 2-4 inches in size. This particular fish is fairly common in Hawaii, and usually seen in small crevices. The male trunkfish has a bright blue color on their sides, while the females are are brown with white spots. Spotted trunkfish are naturally territorial.

The trumpetfish is a commonly spotted fish in Hawaii. Trumpetfish have the ability to change color and are able to bend with their surroundings; they often hide amongst sea urchins, finger coral, and natural objects. The average size of a trumpetfish is about 20-25 inches. Nunu feed on smaller fish and crustaceans. The trumpetfish will often hide behind use schools of surgeonfish when hunting for their prey.