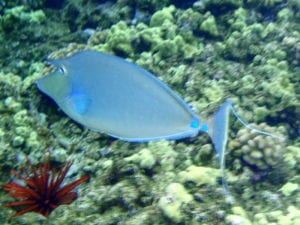 The unicorn fish is in surgeonfin family.   They are named after the spike that protrudes from its forehead; however some species have more of a protrusion rather than an actual spike, and some lack a spike altogether. Unicorn fishes usually have a pair of spines on each side of the tail shaft, which they use as a defense mechanism. They are mainly active in daytime and roam in groups feeding on algae. They  can grow to around 20-24 inches and have a lifespan of around 15 years. The horn-like appendage between their eyes begins growing when a young fish reaches about 5 inches in length, and tends to be a little bigger on males. They are generally not aggressive to each other, but when they do fight they use sharp scalpels by their tails as weapons, not their horns. Their skin is smooth and less susceptible to skin diseases than that of other fish in their family.

You know you’ve spotted this fish by the lengthwise, light blue lines across it’s bright yellow body. This fish can reach an average length of about 12 inches and generally lives in the deeper waters of the reef in large schools.  The Blue-Lined Snapper, also know as Blue-Striped Snapper, orTaape is a Carnivore and will eat crustaceans like crabs and shrimp, along with other smaller marine fishes.  Like most Carnivores, if it is something they can get their mouth around they will try and eat it.

The Blue-Lined Snapper was imported from the Marquesas Islands and released into Hawaiian waters in the 1950’s.  The purpose was to increase available food fish resources in Hawaii. One concern with humans eating this fish is the potential for it to be toxic.  Many countries have warnings about eating Red Snapper in particular, but with this fish being related in the Snapper Fish Family, they can be susceptible to it.  Ciguatera is a toxin that builds up in the systems of some reef, algae eating fishes like Tangs/Surgeons, Groupers and Parrot Fish. Other predatory fishes can accumulate the same toxin by eating these fishes.  It is not toxic to the fish themselves, but if a person consumes fish that have ciguatera poisoning, it can cause illness. The distribution of this species includes Polynesia, Micronesia, Melanesia, the East Indies, and the areas westward to the Red Sea so you are able to see it in many different regions of the world.

Here in Maui we see them daily in Molokini Crater swimming in large groups all around our boats! 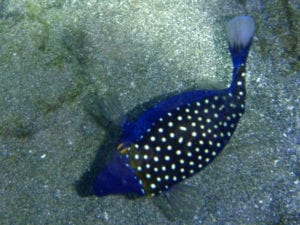 The boxfishes are a squared, bony fish,  closely related to the puffer and filefishes.  You can find boxfishes in the Atlantic, Indian and Pacific Oceans.  They come in a variety of different colors, and are known for the “honeycomb” patterns in their skin and skeletons. This species remains fairly small reaching an average length of about four to five inches. However, on occasion the male could reach up to about seven to eight inches. Their heavy armoured scales are blamed for their limited to slow movements, but because the scales are so strong, few other fish are able to eat them.  Certain Boxfish secrete poisons from their skin into the surrounding water, further protecting them from predation.